Renovating A Californian Bungalow in Sydney

I chatted to Monica about her experience renovating her Californian Bungalow in Sydney. As a community we supported her through the day-to-day of her reno journey and helped provide inspiration so Monica could transfer the house into her dream home; check her story here….

We are a typical young family, with two toddlers.  We bought a small 3 bedroom Californian Bungalow during peak Sydney auction craziness. Although we could see it needed some work, it was what we could afford and we fell in love with some of its original features – the original hardwood floorboards and the Art Deco stained glass windows and cornices.  The rest of the house was an ugly early 80s extension, complete with patterned ‘grandma’ tiles, pantheon columns on the porch and only one 2 x 2sqm bathroom.

We lived in the house for about two years before starting our renos.  I wanted to launch straight in, but my husband insisted that we should live in it for a little while, to get a sense of what we liked, what we wanted to change and to give us some time to really prepare for our reno.

Our main objective was to add a second bathroom and open up the kitchen, so that it wasn’t so pokey.  We hired a draftsman, who planned to extend out by about 1.5m to allow for a second bathroom, a re-jigged kitchen layout and some additional pantry space.  We were excited by the idea…

We went ahead and paid his fees…plus got everything we needed to get CDC approval. The certifier, the engineer… in the end we spent about $10K before we even touched a brick!

This was our first mistake.

We didn’t anticipate how much just extending out that little bit would add to our renovation cost. We had set an initial budget of $150k. When we got a couple of quotes back for the plans we had, it was going to be double that!!  The roof would have had to be re-pitched, foundation laid down and that was a bulk of the added cost.  We felt this would be over-capitalising.

At this point, of the two builders we got to quote, we felt really comfortable with one of them, Phil Martin from SPP Building Services.  He was great and we appreciated his opinion that perhaps our initial extension plan wouldn’t be great bang-for-buck.  In the end, we decided on a compromise situation, where we wouldn’t extend out, but we would work within the existing framework of the home and re-jig things somewhat to make it work a bit better.

The reno all went really smoothly – and I have my builder to thank for it.  He was brilliant in managing the entire process.  He is a perfectionist and every single tradesman that he hired was one too… I couldn’t be happier with the service received.

But, as our friends kept warning us.. we were way over-budget!  We chose more expensive finishes, expanded the scope (eg painted our house inside and out)… it all adds up.  Still, I’m very happy with how it all went.

How did you find the planning process? Any tips to make this easier?

Spend lots of time researching and working out what you want. Renovating Mums was my lifeline!! I am so grateful to have found the group – a wealth of information, advice and support.

Where did you find your reno inspiration? 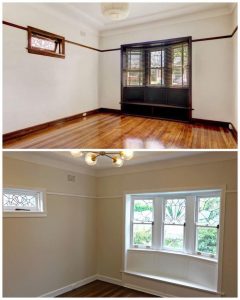 I wanted to make sure the “new” complimented the “old” without looking too jarring. I scoured Pinterest for kitchen ideas as I thought the kitchen should centre all the other design ideas. I found one that I loved, I engaged a colour consultant very early on in the piece and it formed the basis for all my other choices.

How did you go with the budget? What blew your budget? 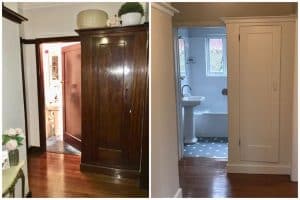 We didn’t originally budget for painting the house both inside and out. However, once we got into it, I wouldn’t have been happy with only a freshly painted half house and the outside hadn’t been painted for what looked like 30 years so that was a massive additional expense.

As with old homes, things creep up that need attention – our slab needed re-doing as it was discovered that it wasn’t in very good nick…bam. An extra $10K.

Did you use an Architect, Building Designer or Interior Designer? Did they make the process smoother?

We used Tom Maric from MCAD Designs, a draftsman to draw up the plans as it was a relatively simple job.  I didn’t hire an interior designer, but I did hire a fabulous Dulux Colour Consultant,Odette Trapani.  She not only advised on wall paints, but the choice of colours for my kitchen cabinetry. I used the paint swatches as a basis for picking out everything else, like my floor tiles and stone. I’d say she was worth every penny!

Do you have any fabulous trades you can recommend? 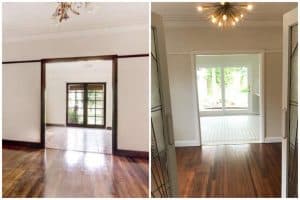 Yes!! My builder was hand-on-heart amazing.  From the moment he quoted us, right through to helping us move back in with a load in his Ute (talk about going above and beyond).  Phil was on site every day, making sure everything was running smoothly, honest with pricing, thorough, his trades were all amazing, he was an excellent communicator and all round great guy.  Philip Martin, SPP Building Services. 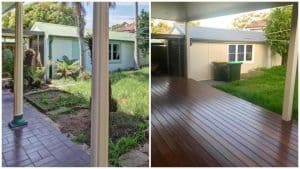 How did you source your fixtures & fittings? 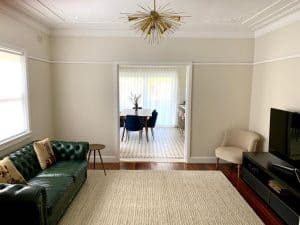 Biggest Cost? My tessellated tiles.  They are Winklemans Tessellated tiles from Olde English Tiles.  Waay over budget and cost $10K just to lay, but they are my splurge item… they really marry the old with the new areas and are a real feature.  I absolutely love them!

And finally…how would you describe your reno in one word? Classic.

Thank you Monica for sharing your gorgeous Californian Bungalow renovation with us. Love how you celebrated the Art Deco features, restoration those beautiful lead-light windows, and your tiles are just stunning!!

Do you have have great renovation experience you would love to share with us (or even a not so great Real Reno story?). We would love to hear from you! Drop us a line here and let us know all about it. 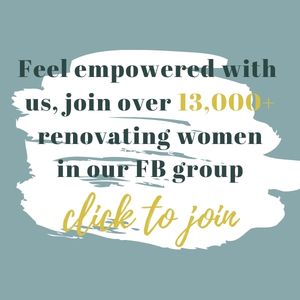 Would you like to receive the most up-to-date renovating tips & tricks?

Join Renovating Mums on our Social Media channels below.

Renovating Mums proudly supports the Sydney Children’s Hospital Foundation to assist children and their families through times of trauma.